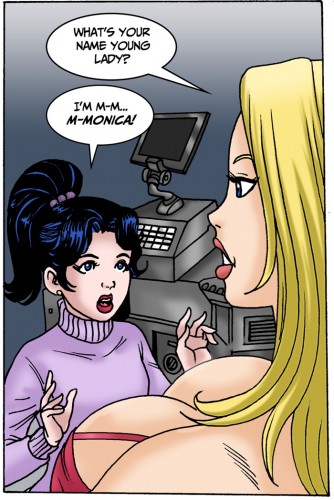 Marilyn shrinks to a teenager in Crybaby Marilyn.

More Suzy and Marilyn Age Regression fun as Marilyn experiments with a youth ray. The comic is inspired by the classic Lois Lane AR comic “The Crybaby of Metropolis,” and features Marilyn slowly regressing to a teenager, adolescent, child, baby, and then…?

Plot Synopsis: Frank is hosting a special exhibition of inventions, and Marilyn and Suzy are invited. Marilyn tries out a youth ray to get rid of her grey hairs in a bid to steal Frank from Suzy. And as Marilyn gets younger and younger, Suzy is looking less like her rival and more like her big sister – or her mother! [Note: This comic features an unbirthing scene.]

Buy this on Selz
Sell digital downloads on Selz

This comic is also part of the Suzy and Marilyn AR Pack.