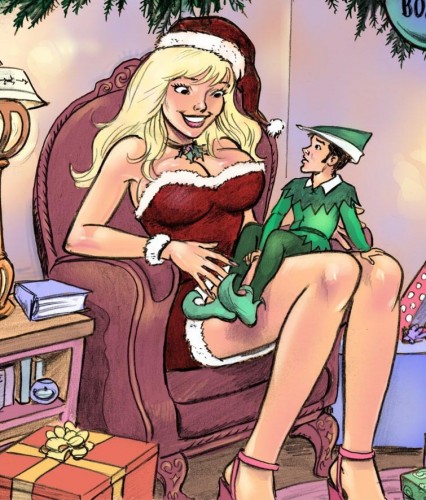 Giantess Jenny has a Christmas surprise for her shrunken boyfriend Brad.

Story Summary: Cute little Jenny is only 4 feet 10 and her boyfriend Brad is 6 foot 6. Wouldn’t it be nice if they were the same size? Jenny plans a big Christmas surprise with a growth ray that turns her into a tall sexy bombshell. Meanwhile Brad shows up with a little surprise of his own. How will Brad react now that little Jenny’s on top? And will Jenny ever stop growing?

The 34 page comic also has 7 additional pages of wonderful sketches by Bojay!

Sample illustrations
Read a review of the comic.

Buy this on Selz
Sell digital downloads on Selz

This comic is also for sale at the Process Productions Store.

This comic is part of the Bojay Female Growth Pack.

3 thoughts on “Gift of the Magi”