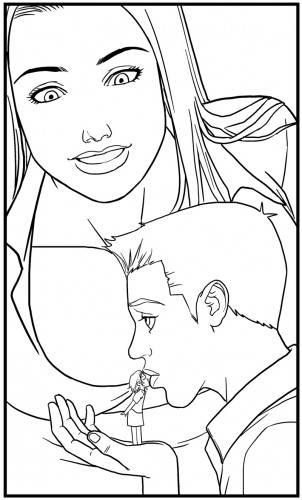 Rob is caught in a love triangle in The Wrong Sister.

Here’s an update on the latest comics. I know some of you have been waiting for some new Female AR / AP comics, so here we go!

Starlet Stripe Part Three will be up in a few days. More Mini-Giantess fun as the 10 foot tall ladies show off their assets to a crowd of eager GI’s. BE Girl Abby gets hot and heavy with little Dick, while Muscle Girl Rosie dazzles a surprising male admirer.

The scene here is from The Wrong Sister, a new comic by the same artist that does Yard Work. The Wrong Sister is a new AR / AP / SW / GTS comic that follows a young guy with a very fertile imagination as he becomes romantically involved with two sisters. There are plenty of shrinking, growing, AR and AP scenes in this one!

Also in the works is The Big Splash Two, a fun sequel to the original Big Splash, with more great art by the Pepper Pair. The Big Splash is one of the most popular comics and Part Two also combines AR / AP, shrinking and GTS, plus some fun SM scenes. Lots of transformations!