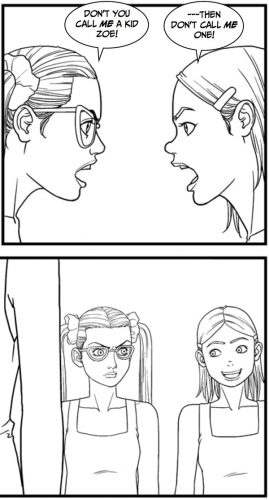 Madison and little sister Zoe fight it out in Flu Shots Two.

Sorry for the delay. Here are the latest comics!

The next Flu Shots chapter will be up soon! Flu Shots Part Two finds shrunken older sister Madison adjusting to being the same size as her little sister Zoe. And soon Zoe starts to feel the effects of the flu shots! In addition to the great art by Yuan, there is also an extended sequence by Bojay.

(Madison looks very cute in this chapter – she wears ponytails and glasses so her friends won’t recognize her as a shrunken adolescent.)

Speaking of Bojay, a new GTS / SM / SW comic called Comic Con will be up after Flu Shots Two. The comic features  sexy cosplay ladies casting growing and shrinking spells on the girls and guys at the comic convention. Comic Con is in two parts, with some of Bojay’s best art ever.