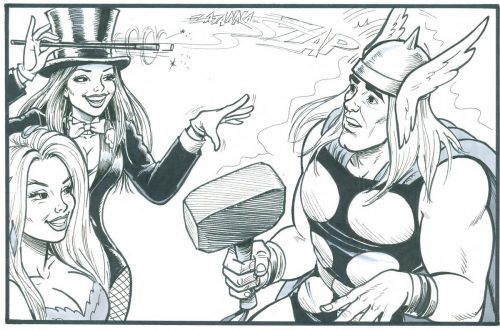 Cosplay ladies cast a spell on a hapless Thor in Comic Con Part One.

More comics are coming up soon!

Comic Con is a fun GTS / SM / SW comic featuring sexy cosplay ladies. Zatanna and her pal Poison Ivy cast growing and shrinking spells on the girls and guys at the comic convention. The comic has some of Bojay’s best art ever, with colors by the Pepper Pair.

Flu Shots Part Four is also in the works, as a shrunken Madison struggles to cope with her ever-growing younger sister Zoe. As I mentioned, there will be at least 5 parts to Flu Shots, so stay tuned!

Other upcoming comics include some fun Giantess and AR / AP themes!

And yes, there will be more Yard Work comics, after Flu Shots has its run.