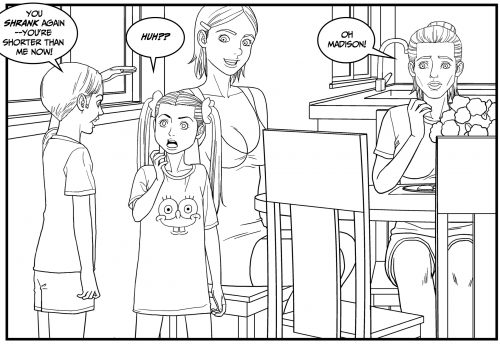 Here are the latest comics:

Flu Shots Part Four will be up in the next few weeks, as a shrunken Madison struggles to cope with her huge younger sister Zoe. And now she has to deal with little brother Michael as well!

Comic Con Part Two has a lot of female size-changing fun that should appeal to Shrinking Women and Giantess fans. The two sexy Cosplay ladies get in on the action, as does a very surprised Wonder Woman. Part Two has a simple, fun plot with lots of sexy women growing and shrinking – you don’t need to have read Part One to enjoy it.

As always there are other comics in the works, including some fun Giantess and AR / AP themes!

I do plan to create more Yard Work comics, after Flu Shots has its run.